Sustainability Problem: Lack of access to a clean supply of water and sanitation is still a major issue facing approximately 63 million people to this day, according to the World Health Organization (WHO).  Of this amount, most are concentrated in the Sub-Saharan Africa, South and Southeast Asian regions.  This issue increases the likelihood of transmitting water-borne diseases, which leads to a large number of infant deaths every year.  The Life Sack addresses Goal #6 of the Sustainable Development Goals (SDGs), which is to “ensure access to water and sanitation for all” by 2030, fostering better access to clean water sources. 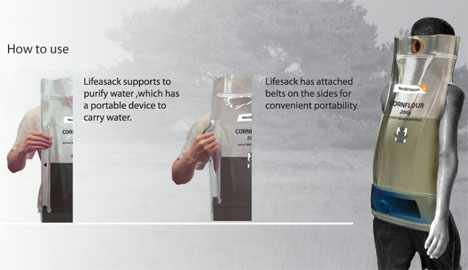 The technology used to filter water is known as SODIS (Solar Water Disinfection Process), which uses UV-A radiation together with the built in thermal treatment process to kill bacteria and microorganisms found in water.