Technology:
Professor Tsumoru Shintake at the Okinawa Institute of Science and Technology Graduate University (OIST) yearns for a clean future, one that is affordable and powered by sustainable energy. Professor Shintake and the Quantum Wave Microscopy Unit at OIST began a project titled “Sea Horse,” aiming to harness energy from the ocean current. This project uses submerged turbines anchored to the sea floor through mooring cables that convert the kinetic energy of sustained natural currents into usable electricity, which is then delivered by cables to the land.

Tetrapods are concrete structures shaped somewhat like pyramids that are often placed along a coastline to weaken the force of incoming waves and protect the shore from erosion. Similarly, wave breakers are walls built in front of beaches for the same purpose. 30% of the seashore in mainland Japan is covered with tetrapods and wave breakers. Replacing these with “intelligent” tetrapods and wave breakers with turbines attached to or near them, would both generate energy as well as help to protect the coasts. Using just 1% of the seashore of mainland Japan can generate about 10 gigawats of energy, which is equivalent to 10 nuclear power plants. 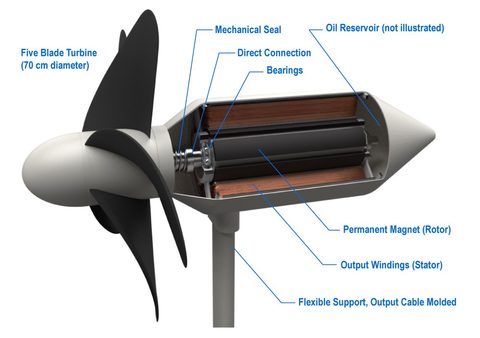 The OIST researchers launched The Wave Energy Converter (WEC) project which involves placing turbines at key locations near the shoreline, such as nearby tetrapods or among coral reefs, to generate energy. Each location allows the turbines to be exposed to ideal wave conditions that allow them not only to generate clean and renewable energy, but also to help protect the coasts from erosion while being affordable for those with limited funding and infrastructure. The turbines themselves are built to withstand the forces thrust upon them during harsh wave conditions as well as extreme weather, such as a typhoon. The blade design and materials are inspired by dolphin fins—they are flexible, and thus able to release stress rather than remain rigid and risk breakage. They are also built to be safe for surrounding marine life—the blades rotate at a carefully calculated speed that allows creatures caught among them to escape.

Stake Holders:
• Manufacturing units
• Public/ Government body
• Commercial building users
• Utilities
• Communities
Deployment / Implementation:
• Step one: Showcase the reliability of the technology to the public and private entities. Attract more investors and spread awareness about the usage to this technology.
• Step two: Set up some full-scale prototype units to prove the principles in real-world conditions.
• Step three: Find companies that could use this technology in to demonstrate the efficiency of the technology.

Smart waste management technologies are cleaning up the sector, helping to reduce the operational costs and environmental problems associated with inefficient waste collection. The Solar-powered trash and recycling bins equipped with sensors – analyse data about what is being trashed and recycled and notify collectors about when a bin is too full and needs a pick-up. This can also help to optimize the trash pickup route and lesser trash going to the landfill. I believe Smart waste technologies are growing in value and will continue to play a bigger role in helping private corporations and public entities improve efficiency and meet the waste reduction goals worldwide.