Solution: This Remote Controlled Beach Lifeguard is designed to assist beach lifeguards in their task of beach and water surveillance. It was positioned on a patrol tower and stands higher than the beach crowd to get a clear overview of the area. When employed, it flies overhead for ground patrol and serves as co-rescue equipment when swimmers, surfers, and other water sports participants are in danger. This charging patrol tower can also be installed on the back of the lifeguard’s pick-up truck. It can recharge itself at the patrol tower, as well as by solar power. When hazard happens, the lifeguard and the remote-controlled assistant will make their way to the victim’s location, and the assistant serves as a surfboard. The lifeguard can control the board to pull the victim back to the coast. 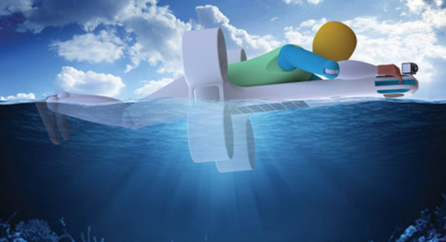 “The business model of Plantagon is based on retrofitting, extending existing buildings, developing new buildings and establishing a symbiotic system. The whole goal of the initiative is to reduce transportation costs and emissions.”

1. Sustainability Problem: On an electricity grid, electrons generated from the sun, wind, or other renewable sources are indistinguishable from those generated by fossil fuels. To keep track of how much clean energy is produced, governments around the world have created systems based on tradable certificates.

4. Next Steps for Deployment:

Concrete is the second most widely used construction material in the world, after water. Manufacturing and transporting concrete is responsible for 4.5 percent of all man-made carbon dioxide emissions. Also, there is a huge amount of plastic that is landfilled every year.

Team of researchers at Massachusetts Institute of Technology have been working on the impact of adding bits of irradiated plastic into cement.

This technology takes plastic out of the landfill, locks it up in concrete, and also uses less cement to make the concrete, which makes fewer carbon dioxide emissions. The plastic is first blasted with gamma rays, a process which is completely harmless.

Exposing the plastic to gamma radiation alters the material’s crystalline structure to such a degree that the plastic turns stiffer, tougher, and stronger.  Presence of the gamma-ray irradiated plastic and fly ash enhanced the strength of the concrete by 15 percent. Replacing just 1.5 percent of concrete with plastic makes it stronger, and could have a significant impact. By one calculation, 1.5 percent plastic in concrete implies 0.0675 percent of the world’s carbon dioxide emissions would be slashed.

The buildings of the future can be built as net-zero buildings by 2050.  Buildings generate pollution in two significant ways. power use and generate waste. Residential and commercial buildings account for 70 percent of power consumed in the United States — electricity that largely comes from burning carbon-intensive coal and natural gas.  Building pollution is in the use of materials like steel and concrete, which have a sizable carbon footprint.

Conceptos Plasticos (a start up) works with local communities to  source plastics to create building blocks that are fire-resistant to construct home. The plastic building blocks will degrade around 500 years or more down the road, but for now they offer shelters for families who can’t afford other housing or are fleeing crises. During the last two years, the Conceptos Plásticos team melted and molded 300 tons of plastic into building blocks for the construction of eco-homes in rural areas impacted by the internal conflict, such as a temporary shelter in Guapí, Cauca, for 42 displaced families.

75% of tires are made of petroleum (needed for the production of the rubber used). At the end of the products’ life most of them end up in landfills .

Michelin, thanks to a new concept, 3D printed a new kind of tire. The tires are made out of molasse (sugar paste), then turned into ethanol which is used to produce rubber replacing petroleum. Since the tire is only made of natural sources (molasse, bamboo,…), the tire is fully biodegradable.  Although, thanks to the new design of the tires, their useful life should be greatly extended. Indeed, instead of changing tires when a problem arises, the new Vision tire can be modified with a 3D printer.

Other article comment: The tiles are also gathering data that can be used for better understanding pedestrians habits and crowd flows . This type of information is useful to commerces but also for cities.

Beijing has a major air pollution problem due to the intense industrial activities that rely on the burning of coal. These emissions lead to a perpetual smog problem (32% of smog is carbon) and lead to thousands of premature deaths every year.

Having an internet connection is key for communication these days. However, natural disasters can disrupt existing internet connection and many places don’t have reliable and wide-spread internet coverage to begin with. Furthermore, some people simply cannot afford to connect to the internet.

As mentioned, there are many different use cases and, therefore, stakeholders for this technology. Across the board, developers are the key stakeholders as they need to use Bridgefy’s SDK to build or update their apps. Next, users of apps that include Bridgefy’s functionality need to be made aware of the mesh network functionality so that they use the relevant apps, enable Bluetooth, and allow the network to form. Depending on the type of app the specific stakeholders will vary, but this could include civilians/individuals, government officials, hospital employees, etc.

This platooning technology has implications beyond the trucking industry. These connected vehicles also collect data on the road and traffic conditions that can be shared with other connected cars and the government to improve safety and traffic more generally.

A new study shows that turkey excrement may have a future as a fuel for heat and electricity. Treated excrement from turkeys, chickens and other poultry, when converted to combustible solid biomass fuel, could replace approximately 10 percent of coal used in electricity generation, reducing greenhouse gases and providing an alternative energy source. Converting poultry waste to solid fuel, a less resource-intensive, renewable energy source is an environmentally superior alternative that also reduces reliance on fossil fuels.

The researchers have compared the production, combustion and gas emissions of biochar, which is produced by slow heating of the biomass at a temperature of 450°C (842°F) in an oxygen-free furnace with hydrochar. Hydrochar is produced by heating wet biomass to a much lower temperature of up to 250 °C under pressure using a process called hydrothermal carbonization (HTC).

The researchers found that poultry waste processed as hydrochar produced 24 percent higher net energy generation. Since poultry waste hydrochar generates heat at high temperatures and combusts in a similar manner to coal, it can replace it as a renewable energy source.

Researchers also showed that higher HTC production temperatures resulted in a significant reduction in emissions of methane (CH4) and ammonia (NH3) and an increase of carbon dioxide and carbon monoxide.

Comments on other blogs:

Interesting! This glass can also be used in automobiles too, especially for roof tops! The Smart Solar-bench provides 24/7 charging for phones, tablets, cameras and wearable devices. It features wireless chargers, USB ports, and Wi-Fi for maximum flexibility. The Smart solar bench has a unique design and can be a great addition to the existing street furniture. The solar bench includes ambiance lightning and built-in cooling fans that ensures the temperature of the seating area never gets hotter than 30 degrees.

Back to top
makeasmartcity
Blog at WordPress.com.